Irfan Erdogan  reports on the current Situation in Turkey:
I am writing this to inform you that people in over 65 cities of 81 in Turkey are demonstrating against the reactionary and oppressive regime
of Tayyip Erdogan and his party. We have demonstrations even in the most reactionary cities in Turkey. People in every neighborhood in the cities are on the street. Police throw gas bombs at demonstrators, beat and arrest people.
It is not like in the late 1960s, because people did not care about us much then. We students were demonstrating for independence and socialism then. Now everybody is on the street. Nobody cheered when
we were demonstrating in the late 60s in Turkey. Now people are cheering and supporting the demonstrators. Today we have more people on the street in my neighborhood in Ankara than yesterday. Police are shooting gas bombs inside the houses because people are providing shelter for
demonstrators who are escaping from gas and police beatings. Youngsters and people from every walk of life are on the street and want the Erdogan government to resign. Erdogan uses the classic rhetoric about demonstrators and he threatens them by saying that he can send one
million supporters to the street (he means, to smash the demonstrations). 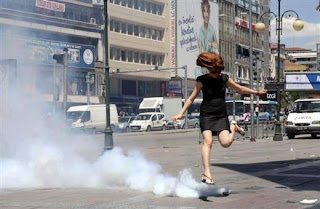 He says: "I keep 50 percent of the population at home" (he means that he can use 50 percent of people who support him against the other people). His mindset and approach reminds me of Jay Gould who said once that he is not worried about demonstrations and labor strikes, because he can hire one-half of the working class to kill the other half. For a lot of people, Erdogan is a reactionary dictator. In Turkey people are scared to say something against Erdogan. Television did not provide any news about the demonstrations except the television stations
of the major opposition party and Turkish Labor party television,
because mainstream media either support the administration or are scared
of Erdogan?s rage/wrath. People in Istanbul walked in front of the major
television stations and announced that if they do not feature them in
the news they will occupy the TV station. Then, TV stations started
reporting,  but in a highly distorted manner. After this incident, very
few media personnel resigned from their posts in the TV channel. Erdogan
scolded the Reuters journalist who dared to ask him a question that he
did not like. The Internet is used for the most effective channel of
communication and organization of the protests by everybody. Erdogan
expressed his utmost anger against Twitter and social media. Everybody
uses their mobile phone for communication and recording the events and
putting/disseminating them on the Internet. Mainstream media started
lying as usual. Two main labor unions in Turkey run by those who ask
some meaningless concessions from the government try to stop workers to
demonstrate, but workers are on the street, too. Demonstrations are
rapidly spreading all over the country.  Soon, I know, religious
reactionaries (not all religious people are reactionary) will attack
demonstrators. There is a high probability that we will witness a
domestic/civil war in Turkey.

I was at the center of the demonstrations in Ankara yesterday and the
day before. Demonstrators do not do anything wrong, but police
continuously shoot pressured water, gas and noise bombs at them and
attack demonstrators. Police behave like they are fighting an enemy.
They curse at and threaten people by e.g. saying: "get lost otherwise we
arrest you and you know what we do when we arrest you." We know there
are some progressive and conscientious people in the police force, but
they are also under the threat of the empire of fear. But we will see a
differing police behavior as the time goes by in the process. Now, there
is an indiscriminate uss of gas bombs (CS gas). Your eyes get severely
burned and you cannot breathe, you start coughing, and you feel dizzy if
you are close to the fume. Also when it hits you or blows up beside you,
you get shocked (I saw it). So far we have four killings and many wounded.

As usual, they claim that demonstrators/provocateurs destroy and
vandalize everything around. Yes we see a lot of destruction; in fact,
it is started and done by plain-cloth police. How do I know: (1) this is
a historical fact. (2) I know from the late 60s, because we could
recognize the police then, but it is difficult to recognize them now.
(3) How come there is no vandalism, destruction and terror where there
is no police around? Here are few examples: I attend demonstrations at
the center of the city where police provokes, attacks and where plain
cloth police destroys everything aroun,d provoking some young people to
do the same. My daughter and my wife and neighbors attend huge
demonstrations in our neighborhood where there is no police presence
yet: You can see no violence, no destruction and no vandalism in these
demonstrations. Yesterday, I had to come back home early at night
because I almost fainted three times because of the police gas. Later, I
attended two neighborhood demonstrations and there were no destruction
and violence. Last year, I attended two demonstrations in Athens,
Greece. There was no police presence and there was no violence and
destruction. Athens was burning when there was police presence. When
police was involved, Athens was like a war zone, like in Ankara and
Istanbul. Those who rule the police force organize and run the show of
violence and destruction as usual.

People are against "Erdogan?s empire" that is misrepresented in Europe
and elsewhere. This reactionary party clearly stated that they "use the
democracy train until they get the power and reach their destination."
They are misperceived by Europeans who think that this government is
anti-racist and democratic. They are not racist because their political
view belongs to the middle ages of Islamic rule: They think that all
Muslims are the people of God and those who are not Muslim are condemned
by God and will all go to hell. That is why Erdogan is against
nationalism, but his/their nationalism is based "ummad/?mmed" that means
the collective community/nation/commonwealth/empire of Islamic peoples.
Their nationalism is based on a different logic, the logic of Muslim
statehood. A statehood where a prime minister considers himself king and
tells people that he does anything he wants, he builds a mosque there if
he wants (?there? refers to the park where people do not want the
government to cut the trees down). Before the uprising, demonstrators
were sleeping in the park and police attacked them at dawn. The
government uses the known tactics of Hitler: The police invades people's
(e.g., journalists, academicians, army commanders) houses and arrests
them very late at night, especially at dawn. They call it ?dawn
operation?. They arrest young people for demonstrating or saying
something against the administration. Students at school cannot wear a
T-shirt with any message that can be considered ?political expression?.
Now, there are journalists, academics, politicians, army commanders,
students and other political prisoners who have been in jail for more
than 5 years WAITING FOR TRIAL OR TRIAL IN PROGRESS.

Their rule is based on material plunder and ignorance that is fed by
multi-channeled mis-information, education and re-education. Their
current rule is historically comparable to extensive degrees of material
plunder: They (party leaders and business owners) allocate material
riches to themselves and immaterial values to the true and fake
believers who generally are ready for slaughter while chanting ?God is
great? regardless if opponents are Muslims or not - like crusaders in
the middle age who conducted killings in the name of Jesus despite the
fact that Jesus is completely against oppression and killings. We hear
this chanting on TV news when Syrian opposite forces fire guns and kill
people. This also reminds me not only od the War Prayer of Mark Twain
but also the pressure he got from his publisher and family against
publishing it. The policies of the ruling party in Turkey are also
supported by some old so called Marxists and/or, Maoists, ?leftists? and
their sons/daughters who mostly reside in Istanbul and live a posh life
(some work for media corporations with 20-30 thousand dollars salaries a
month and/or get paid by the media for their appearances in discussion
shows or get benefits in different ways).

The widespread fear in Turkey is also fed by private enterprises: Once
there was state censorship (it still prevails), now we have censorship
by the rule of private enterprises, so-called auto-censorship
(self-censorship) which is buttressed by organizational and peer
oppression in media and academia. I wrote a book for a university last
year and I had to revise it many times because they are scared of law
suits from private enterprises (especially by the media). You can not
mention a corporation?s name, you cannot criticize a corporation by
providing its name. I sometimes watch the Tonight Show and similar US
shows in English in Turkey and Turkish subtitles do not give any names
of any corporation that is mentioned in the show. I was sued by the show
producer last month for 20.000 dollars for criticizing one of the most
popular TV sitcoms in a meeting (I make about 2000 dollars a month).
Freedom of thought and expression is suppressed not only by the ruling
administration but also by the corporations and those who are scared of
being a target of revenge. Freedom is a right and privilege of the
ruling and powerful forces who can also manipulate and abuse the law for
their own interests. Copyright freedom is not a freedom of the writers,
it rather protects (or turned to be) the property right of the enterprises.

This is the first time I am witnessing a public uprising. It is
different than the one we had in the late 60s.

People all over the world should know. Yet, unfortunately, the ?whole
world is watching? carefully packaged factoids. In Turkey, the media was
not proving any news on the uprisings until yesterday, and they were
broadcasting usual series, soap operas, sitcoms, competition programs
and films instead. Now they cannot hide anymore, thus they started their
usual mind management business in the news. To a varying extent, similar
evaluations can be reached about the coverage on international news
channels such as BBC, Al Jazeera, The Press TV and RTV that I watch often. 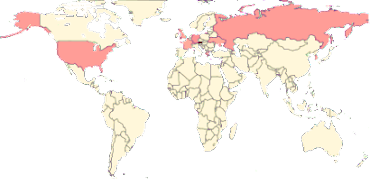 geographical distribution of artOrMore visitors in 2011

back to the top